At its simplest, the lifecycle of a yotta module is three steps:

The yotta registry, which hosts released versions of yotta modules and makes them searchable and accessible to other people, makes sure that every version of your module that you publish will be available forever. So even if you abandon your source code, delete your Github and run away to live in the mountains, people who are using your code won’t be left stranded.

(If you want to take ownership of an abandoned yotta module, to publish fixes and improvements, please submit a ticket on the yotta issue tracker.)

As far as yotta is concerned, you can manage your source code however you like. When you run yotta publish, the version number will be read from your module.json file, and a new version uploaded to the yotta registry. But there are some rules you must follow to play nicely with people using your module:

These are the basic rules of semantic versioning, there are some exceptions for 0.x.x releases during early development, but if you stick to the basics it’s hard to go wrong.

See handling updates to dependencies for guidance on how to deal with breaking changes in your dependencies.

If you increase the major version of your module, you should bear in mind that people may continue to use the previous version for some time. So it’s a good idea to back-port any important security patches or bugfixes to earlier major versions.

For example, if you’re releasing version 2.0.1 to fix a bug in the 2.0.0 release, and this bug is also present in the older 1.7.4 release, you should back-port the fix and release version 1.7.5. Anyone using your old version will be able to update to a fixed version without worrying about backwards incompatible changes.

If you’re using git to manage your code, you can easily go back to an earlier version, and start a new branch for bugfix releases like this:

This creates a new branch called 1.7-bugfixes, based on the existing tag v1.7.5, which yotta version will have created for you when you increased the version to 1.7.5. (If you don’t see any tags in your Github repository, that’s probably because you need to run git push --tags to push your tags to the remote.)

Once you’ve got this branch you can make and commit changes, then use yotta version patch and yotta publish to bump the version and publish a new version, before switching back to your master branch:

If your module is written in C++, you should also take advantage of C++ namespaces to provide backwards compatibility. Namespaces allow you to provide old versions of your API alongside new versions, make it obvious which version of an API someone is using, and make it easy for your users to switch between versions of your API.

In fact, namespaces are such a useful feature of C++ that we’d recommend using them even if your module is otherwise C.

This allows use of both versions of foo in the same program, if that is necessary.

yotta makes the versions of modules available to CMake, and as preprocessor definitions. This can be useful to include in built software so that a running program can be queried for its version information. The definitions are:

The Semantic Versioning rules clearly explain how to increment the version number of your module when its functionality changes, but they don’t offer a clear guide to how to handle breaking changes made in dependencies of your module. In this case there are some guidelines you can follow to minimise the disruption to users of your module:

One common pattern is for a yotta module to have private “implementation” modules, which implement the functionality for different compilation targets, with the right implementation module included based on config information.

In these cases the base module (foo below) is the only module on which users will depend: the implementation modules are not depended on directly by anything other than the main module. 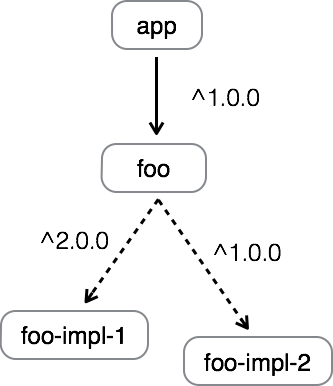 In this case, to handle a backwards incompatible change being made to the foo-impl-1 implementation module, perform the following steps:

It’s possible to do this because the app (or any other module depending on foo) does not depend on the implementation modules directly. It only depends on them via foo.

The implementation modules should have warnings in their README’s that they should not be depended on directly: if someone depends on them then it will not be possible to just update the minor version of foo (this is the next case).

Another pattern is that our module might rely on another module for its implementation which is not solely used by your own module. This might be the case if, for example, you depend on a utility library that other modules and applications also depend on. For example: 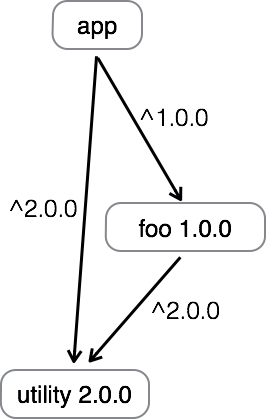 In this case, the sequence of events when the shared module (utility in this example) makes a new major release with breaking changes is:

# Handled in a Backwards Compatible Way

# Handled in a Backwards Incompatible Way

In case (B) things are harder:

Case (B) above is bad because it potentially forces major version updates of lots of modules, and places a high burden on users. Fortunately there are cases even where (B) applies that we can avoid a major version bump to foo. 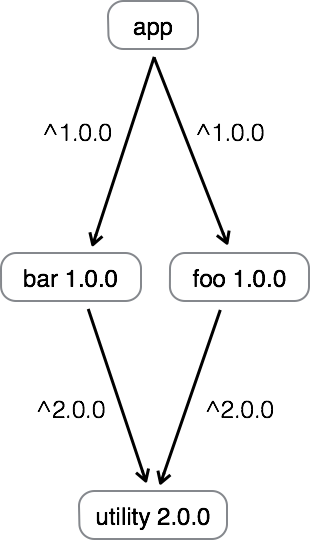 (This is possible, for example, in internal modules in mbed OS, where the only other things that depend on them are also internal mbed OS modules. It’s also common in private modules shared only within your own applications.)

Note that this is compatible with semantic versioning since the APIs of neither foo nor bar have changed in a backwards incompatible way. In the future a smarter dependency solver in yotta should also make this case automatic, by solving for a working set of dependencies globally, rather than locally at each point in the dependency graph.